June 20, 2016
19 June, 2016
Today we start a new journey as we head toward Ternopil region. First there are the many tears of a fond farewell. Our short time of joy and connectedness in "real" time was over. Now we will begin to rely on the many memories we have collected. The bus ride to our first site was long because of the care the driver, Stephan, took to get us there and a couple "pit stops". 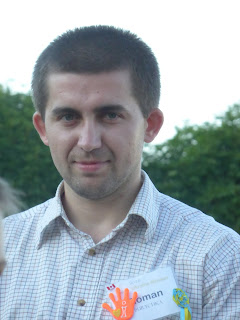 Roman, the Site Secretary, who was with us throughout our time at Pochaiv Site and stayed with us until we were safely transported to our new community.  When we reached Borshchiv, Roman shared with us a beautiful goodbye which he had written.  We were very moved by his words and hope to get a copy (translated into English, of course, as his notes were written in Ukrainian).
In Borshchiv, we were greeted by Luba, director of the Ternopil Sponsor Site, Luba, the local Borshchiv sub-site director, and Ivan, a sub-site volunteer, by dancers in bright blue embroidered traditional clothing, by children expressing themselves in English to greet us, by more young dancers with bright smiles, and, once again, a beautiful bread with salt. We were also invited to dance. Then a big, tasty lunch. 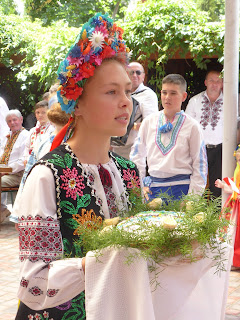 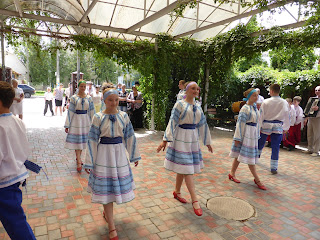 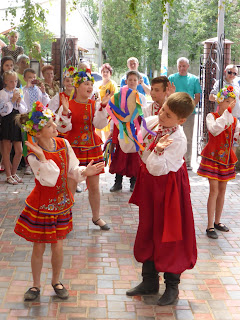 The first record of 1456 mentioned the town of Borshchiv as the property of nobles Dudynsky. Since emancipation it has been ruled by Poland, Austria, Germany, the USSR, and finally a free and independent Ukraine. They are known for the caves called "Optymistychna" which are 230 km long and have been referred to as maze caves by spelunkers. 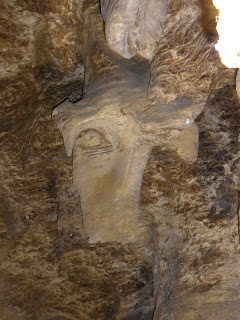 We attended a service for Pentecost at an orthodox cathedral and learned of its shrine for sightings of Mary. It was a short walk to the Chalice sub-site office which is directed by Luba with community volunteers to look after 115 children in 45 villages. From there we viewed the outside of a regional museum and museum of Taras Shevchenko, the greatest Ukrainian poet. And then ... a meal like no other, some singing, some dancing, a lightening and rain storm, a short walk to the hotel, and lights out. 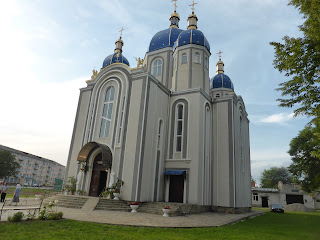