The Impact of the War


This morning we are greeted in the village of Holoby, and a large group of villagers invites us to their local auditorium for presentations and musical performances.  The difficult conditions for the villagers are evident at every turn – most families live in cramped quarters in row houses or diminutive detached homes, with small gardens providing vegetables to sustain them.  The fruits of the work of Chalice are equally clear – we are told that of the 462 students that attend school here, half are sponsored children.


About 300 people fill the auditorium, including many sponsored children and parents who tell their moving stories.  Four mothers take the stage with their children, and relate the effect of the war of aggression in the east on their families.  Irena tearfully tells of her son Andrij, a sponsored child for 10 years, who was taken into the army after he graduated school.  On April 18, 2014, the village learned that Andrij had been captured, beaten, and executed by a firing squad.  Natalia and her 5-year old sponsored daughter Sofia have been more fortunate.  Her husband, a physical education teacher, went to war in the same month when news of Andrij’s death arrived, but he has since returned safely.  Olia, the mother of sponsored child Maria, had to endure two tours of duty for her husband – the first involving 3 months of defense of the embattled airport in Luhansk, and the second in Donetsk (both were regions of intense fighting).  Thankfully, he returned safely from this service, however economic hardships were intensified in his absence, and the stress and anxiety inflicted by these ordeals has left what appear to be permanent scars on the families of the soldiers.


We learn that most soldiers sent to the eastern regions of conflict are recruited from western Ukraine – where the two Chalice operational centres reside.  The soldiers sent off to defend their land are given 3 things by their family – a cross, an embroidered towel, and a handful of soil from their native land. 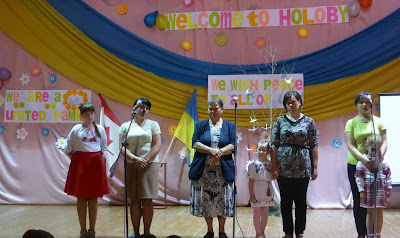