On Monday, we met a priest who directs a school of nursing in the nearby city of Forte Liberté. He spoke of health and medicine having no boundaries and no ethnicities – bodies are bodies, medicine is medicine. On Tuesday, we were up and running in the two medical clinics in Terrier-Rouge and Grand Bassin, seeing patients for the first time. We learned today that, while that is a noble and beautiful sentiment, the realities of healthcare are far from the “We Are the World” campfire sing-along.

In some ways, the fact that we’re not in Canada comes with some liberation.  For example, in Terrier-Rouge this morning, we opened the day with Sr Merilise praying with the patients gathered in the waiting room. If we tried that at home, we’d be swiftly escorted from the building.  Later in the day, Dr Lisa was able to send a patient straight from her consulting room to Irene for chiropractic care. Just imagine being able to do that at my own practice at home, she says. How great would that be? 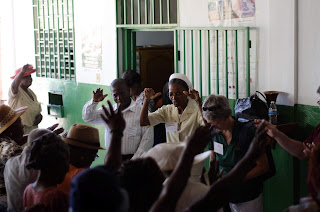 In other ways, things were just like home – computer problems causing headaches among medical professionals? Like that never happens!

But in many ways, as we expected, the differences in our healthcare systems, and ability to lead healthy lifestyles, are glaring. Betty saw a young woman with severe joint deformations, and knew that in Canada she would have received multiple joint replacements and could have led a mobile life. In Haiti, the best this woman can hope for is a walker. Lisa and Irene saw a woman in her sixties complaining of neck and shoulder pain, only to learn that she carries five-gallon jugs on her head and hips for at least 20 minutes at a time. 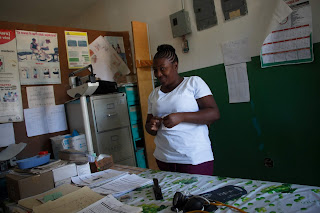 Seeing this disparity is dispiriting – but not every patient with physical challenges has resigned themselves to a life of immobility. Many of the members of the Grand Bassin team were struck by a young man named Fermis, who is paraplegic. Despite his physical difficulties, he had built his own mobility scooter and is able to work independently as a shoemaker. He wanted Betty to take his picture with his scooter, because he is proud of it and what he has been able to achieve. 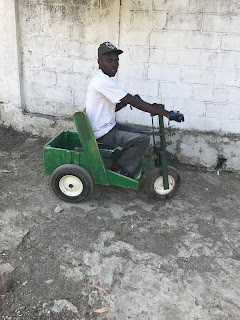 Every member of the medical teams were impressed by how polite and respectful all of the patients were. When they saw that a baby and a young boy needed more urgent care, they agreed to let them go ahead of them into the clinic, even though some had been waiting for hours. Edley overheard one patient grumble about the delays, and her friend said “If these doctors have taken the time to come from Canada to help us, I can wait.”

So we take time to reflect on what we take for granted in our Canadian healthcare system – access to tests, treatments, therapies, medications, and surgeries without paying a dime. Randy called it our “Canadian luck.” But, he reminded us, we are bringing a little bit of that luck to our Haitian friends for the duration of this mission, and our presence could have positive outcomes long after we leave. 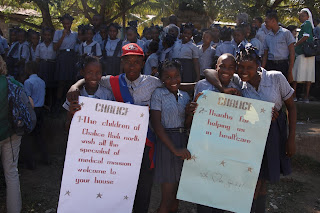