It didn’t look good. The CBC radio hosts announced Friday’s forecast as a classic maritime “wintry mix” – snow turning to freezing rain turning to rain. Peaking, of course, at the time many members of our team were set to fly to Toronto. We passed accidents on our way to the Halifax airport, and the departures board in Charlottetown was a block of red “cancelled” notifications.

It was clearly early on that God’s grace was certainly with us throughout our travels from our hometowns to Cap-Haitian.  For every set-back, there was a greater fortune. Ed made it out on the only flight to leave Charlottetown on Friday. Lost passports and phones were quickly found. Delays in Toronto were magically regained by tailwinds to Miami. The Lord wants us here, that is clear. 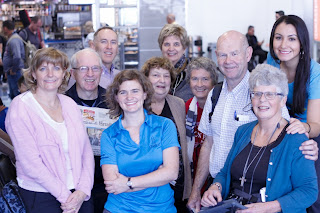 We met with Edley, the Site Director of Haiti North at the airport, along with our other local colleagues Sr Gina, Sr Merilise and Edley’s assistant Marc-Edly. We exuberantly burst into Happy Birthday for Edley as soon as he got on our bus…after which he discreetly informed us that his birthday is Sunday.

On our way to our accommodations, we stopped at the Chalice Site office. A choir of sponsored children had learned a few songs to welcome us.

After their songs, we introduced ourselves. They told us they had prepared something to show us, and beckoned us to sit down. Their teacher set up three hurdles, and informed us that the children would jump the hurdles, first with their eyes open, and then blindfolded. The boys jumped the hurdles with ease, to great applause. Their teacher then tied on the blindfolds…and removed the hurdles. She led the first boy back to the start of the course and told him he was in position. He crossed himself, and jumped with all his might, to even more riotous applause. 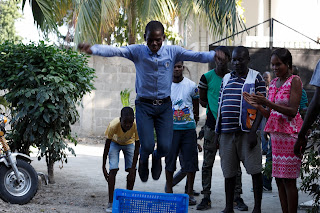 Each time the hurdlers jumped, the children laughed until it hurt. 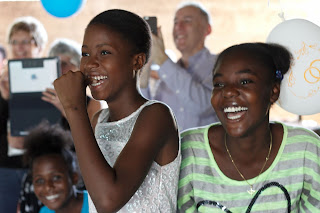 Just before we left, our own songbird Irene taught the children a song en français, which they caught onto very quickly. 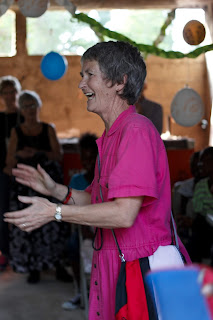 When we got to our accommodations and got a moment to debrief our (very long) day (2 am wake up call, enough said) -- the childrens’ singing and laughter was the uncontested highlight. It’s difficult to hold onto the stress of travel when two dozen children are busting a gut over invisible hurdles. 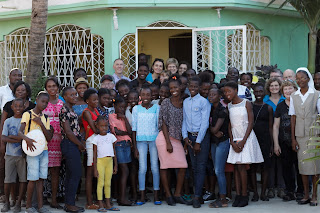 We had the rest of the day and all of Sunday to catch up on sleep, pray and eat together. The talented cooking staff prepared a rich and sumptuous goat and squash soup, and with it we received a history lesson. Edley explained that  in colonial years, the French colonists would eat soup, but not permit Haitian slaves to have it. When they won their independence, the Haitians made soup as an act of triumph. They now have this soup on January 1, their Independence Day. In gratitude for the lesson, we sang him “Happy Birthday” twice more – ok, we did sing it twice but we would have done it anyway. He can’t complain that we forgot.

We’re rested and ready to head to the clinics tomorrow, where we will meet our local healthcare partners and create plans for the remainder of our mission. We read in Friday’s Gospel of the stubborn woman who persists in front of the unjust judge, and we have already seen that when we are persistent, God gives us every ounce of grace we need. ­­We will probably need this little reminder in a few day’s time. Thank you for your prayers – your persistence has been proven!