February 15, 2017
Ron is volunteering for three months at Chalice's Assam Sponsor Site, located in Guwahati, India. This is his second update about his experiences thus far:

Hope you and your families are all well. I am very busy helping this Chalice site with some of their office work and also St. Betsy with the bigger program, know as the Women Development Centre. I do find time to go for my walks along the river and up the big hill that this convent is built on.  It is quite a high hill and the convent is located at the lower quarter. 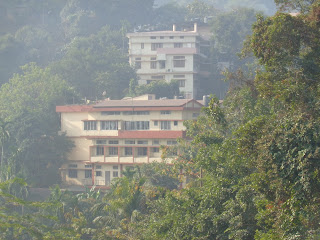 A picture of the convent taken from the opposite hill where the Don Bosco Institute (DBI) is located.

The Don Bosco Institute (DBI) was started by Fr. Thomas about 15 years ago and today it is one of the major teaching institutions of Guwahati. It was initially started as a school for poor boys living in villages outside of big towns who did not have easy access to schools. Today it does not only teach the trades but also provides schooling in computer science and has a well recognized MBA program. These two programs help raise the funds for the education of the poorer boys and girls. DBI has boarding facilities for the boys and the girls. Where the DBI building stands there was a steep slope and ravine with no roads. Fr. Thomas bought that half of the hill and built the present structure. 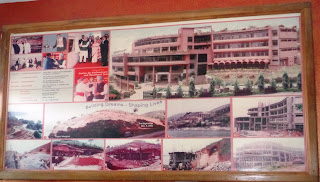 The Don Bosco Institute - Various stages of construction of one man's dream and God's hand at work. It is truly an inspiration. 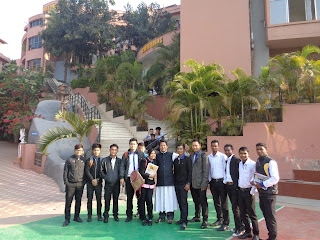 Fr. Paul with Boarders from DBI

The Catholic population of India may form a very insignificant (1.5%) part of the total population but their contribution to society cannot be ignored, thanks to the priests and nuns, who are all local. Most of the leading hospitals, schools, and universities of this country are a product of their selfless dedication to God's service. 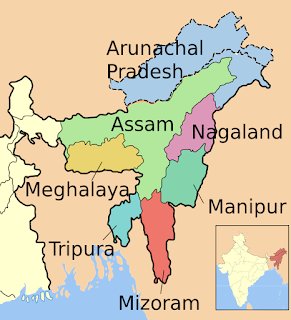 As I may have told you, I am in Guwahati, Assam, India. Assam is one of the 7 sister states of India; some may say or feel that they are the 7 forgotten states of India. If it were not for the occasional uprising of some of the militant groups in these states, the central government would not give them the attention they do. These 7 states are joined to West Bengal and the rest of India by a narrow strip of land between Bangladesh and Nepal. Prior to 1972 these states were all included in Assam State, with Shillong as its capital, but from 1972 most of the major tribes obtained their own statehood with a few tribes still fighting for their own state. The total population of these 7 states is relatively small (about 45 million) and consisting of 10 to 15 major indigenous tribes, who have their own languages and culture. Most of these languages are now written languages since the early 1900’s, using the English alphabet, thanks to the Catholic missionary priests, primarily the Salesians.  So, not surprisingly these states are majority (80%) Christians, except for Assam which is predominately Hindu and Assamese is written using its own alphabet. The Christian population in the other 6 states is made up of few Christian denominations, Catholics being in the majority followed by Baptist and Presbyterians. Nagaland is predominately Baptist.

For those of you who know that I love gardening and flowers, it will not come as any surprise that I was quite shocked at the flowers in Guwahati. They are just beautiful. Most of the same flowers that we, in Canada, grow in spring and summer. 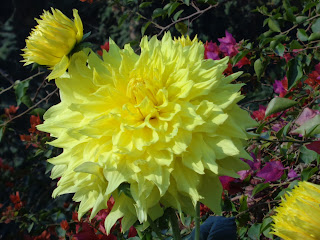 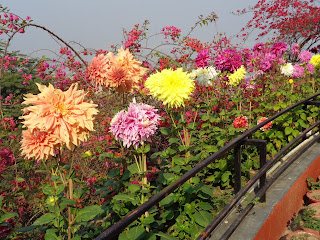 I include these 2 photos of Dahlias because they are huge; the size of dinner plates.

Because most of the homes and buildings in this part of Guwahati are built on the slopes of hills and the rains are very heavy, the retaining walls to the slopes are very wide and built as steps or terraces. The flowers are grown in pots as the soil not so good and these pots are placed on these terraces; hence the beauty of these terrace gardens.

The convent I work at is in Khalguhri which is a suburb of Guwahati. It is in the hilly section of this ancient city. Guwahati is located on the southern bank of the mighty Brahmaputra river, which starts in the south eastern side of China and winds its way through all of Assam and then flows into Bangladesh and on into the Bay of Bengal through the Sundarban forest. During the rainy season (April to August) the river is at its highest and widest levels and I understand one cannot see the opposite shore. 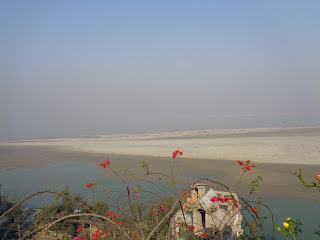 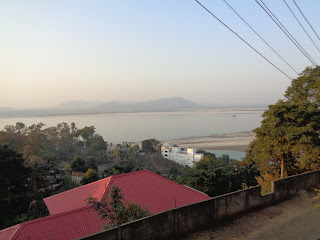 These pictures show the river with the water at its lowest level and there is a long and wide sand bar (Chore), which I am told will not be there this time next year after the rains have stopped and the water level drops again. I am told it will look completely different from what I see today and the mile long sandbar will be gone. All that sand will end up in Bangladesh. In the meantime, people are happily growing peanuts and all sorts of lintels on this island. There may be another island next year but nobody knows where. 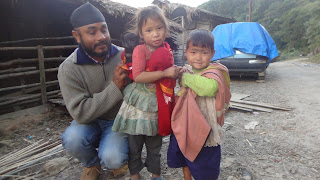 These children belong to a tribe in eastern Arunachal Pradesh state and live near the Chinese border. Puppies are wrapped onto the children to keep them warm in the winter months. If they are rich they have two puppies – one in front and one on their back. The puppies are wrapped around the child all day and night. I will leave it to your imagination as to what happens to the male and some of the female puppies in the summer when they do not have to keep children warm and will be too big and heavy the following winter.

I am enjoying the seasonal fruits and vegetables and the simple but good, tasty food of the convent. Meals are usually accompanied by interesting stories and recollections by Sr. Betsy, who is from Kerala but has been in this area for about 15 years and has served in some very remote parts of these 7 states.

I have so much to say but I have to stop and get back to work. Sr. Sheeba has already inquired about something that I promised would be done today. Tomorrow I make a weekend visit to Shillong to visit a set of my cousins.