Fresh Cream and the "Mising" People

March 31, 2017
Ron is volunteering for three months at Chalice's Assam Sponsor Site, located in Guwahati, India. This is his fourth update about his experiences thus far:

I hope you and your family are all well. I understand you had a very mild winter. I am well and enjoying the mild weather in north east India. It has been raining a bit more and the big sand bar in the Brahmaputra river is almost under water. 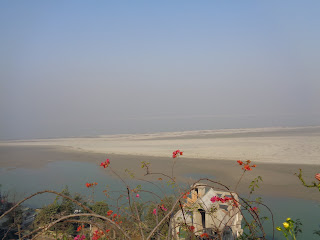 You may recall the following description from Ron's first update:

Guwahati is located on the southern bank of the mighty Brahmaputra river, which starts in the south eastern side of China and winds its way through all of Assam and then flows into Bangladesh and on into the Bay of Bengal through the Sundarban forest. During the rainy season (April to August) the river is at its highest and widest levels and I understand one cannot see the opposite shore. The picture (above) shows the river with the water at its lowest level and there is a long and wide sand bar (Chore), which I am told will not be there this time next year after the rains have stopped and the water level drops again. I am told it will look completely different from what I see today and the mile long sandbar will be gone. All that sand will end up in Bangladesh. In the meantime, people are happily growing peanuts and all sorts of lintels on this island. There may be another island next year but nobody knows where.

Since my last Update email I have been on 1 field trip that lasted 7 days by train and then by jeep. I am still working on setting up some excel spreadsheets that will help Sr. Sheeba with her accounting for Chalice and the convent’s records. Sr. Sheeba has since left for Batlagundu, Tamil Nadu where she underwent a spinal operation and is now in recovery. I suspect she will not be back before my departure on April 12.  So, I am now working under the watchful (but caring) eye of Sr. Betsy, who runs the Women’s Development programs.

On March 10 I accompanied Sr. Betsy and her team on a 7 day field trip to the north eastern part of Assam. Our first stop was Harmotty which is a small town on the border of the next state called Arunachal Pradesh on Assam's northern border. We had a pleasant stay at the Holy Cross Convent for 3 days and visited some of the villages in the surrounding areas. As in most parts of India the disparity between the middle class and the next level down is quite striking and sometimes very difficult to handle. This is also one of the areas that has a large Adivasi population who are just subjected to doing most of the menial work. It is this part of Assam that I had referred to in an earlier email in the context of the human trafficking problem. Hearing their stories of missing girls / children in so many families was distressing and emotionally draining. I am helping Sr. Betsy with the documentation to help her raise funds that will enable the WDC (Women’s Development Center) to start some programs in north Lakhimpur district.

As in all convents I have had the good fortune of visiting, the hospitality of the nuns is unbelievable. They literally spoil me. I only mentioned that I enjoyed drinking fresh milk and having the fresh cream on bread when I last visited Bangladesh in 2003 and Sr. Marina said “You like that? Okay!”. The next morning the fresh cream was on the table with a glass of hot milk. I just looked at Sr. Marina and she said, “Just for you; milked this morning, from the cow, boiled and on the table.” That was it, warm milk and all the fresh cream I wanted for 3 days. I am sure my siblings and friends from Bangladesh know how good fresh cream with some crushed jaggery on bread tastes.

Of course, before I had made that comment about enjoying fresh milk in 2003, I had already walked around their property and had seen the cows and observed that some had calves. Yes, they are very self-sufficient for food. They grow their own rice, seasonal vegetables and fruits and have cows, goats, rabbits, hens, pigs, pigeons, and two fish ponds. All of this is necessary to reduce food expenses for the convent, the 50 girls in the hostel, and for resident staff. Unfortunately, the hostel buildings are in need of some major repairs and renovations. The cracks in the walls and supporting pillars from the last earthquake are clearly visible. So, at sister’s request, I spent a few hours taking pictures and preparing a document that she could use to apply for funding for these urgently needed repairs.

Yes, I did some fishing at the ponds and caught a few small fish, which the cook’s 5 year old son was happy to take home to his mother. When I told the sisters that their ponds only had small fish they laughed and informed me that just a week earlier they had sold all the bigger fish; about 100 kg in all. No, the nuns would not tell me a “big fish” story because then they would have to go to confession, right? That was true because I saw all the dregs from the fishing nets on the sides of the ponds.

The remaining 3 days were spent visiting some tribal villages as part of Sr. Betsy’s WDC projects. These visits involved a 4 hour drive further east to a smaller town called Jonai, which is just about 50 km from Assam’s eastern border and about 100 km from India’s eastern border with southern China. Jonai is really a remote town even by Indian standards. After Jonai, it is only villages and dirt roads, I was told. It has two hotels and we stayed in the better one. It was quite an experience not only for this Indian-born Canadian but also for Sr. Betsy. The sign said air-conditioned rooms but I think they forgot to install the air conditioners because there was a big hole (about 18 inches X 18 inches) in the wall. The washroom only had a tap but no sink and no hot water; the bucket was an empty paint container. Thankfully there was running water and the toilets worked. The bed sheet only covered half of the mattress, so I asked for a second one to cover the other half. At about 5:00 in the morning a minor bird flew into the hole in the wall and started squawking. You get the picture!!!!

During this 4 hour drive Sr. Betsy and the others were talking about the human trafficking problems, the missing girls; how badly the Nyishi people / tribe treat the Adivasis and the missing people; how nice and peaceful the missing people are; on and on they talked about these missing people and girls. So in total frustration and puzzlement, I gave up and asked: “If these people/girls are missing how do you know they are so nice, peaceful and pleasant?” Everyone was silent for a second and then burst out in laughter. Then they explained that they were talking about the “Mising or Mishing” tribe of whom I had never heard of before this conversation.

The visits to the villages surrounding Jonai were interesting. The people are predominately of the Mising tribe. They are very peaceful people. I am always amazed at how little it takes for some to be happy with what they have. It is probably better not knowing "any better”. I will let the pictures tell the story. 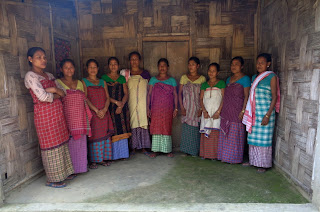 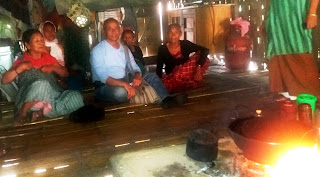 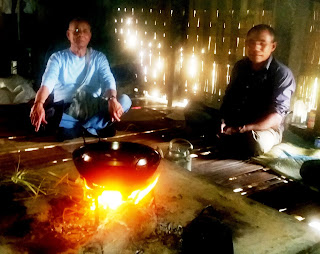 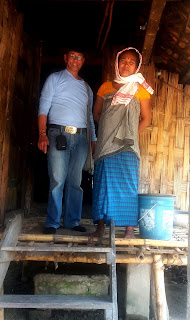 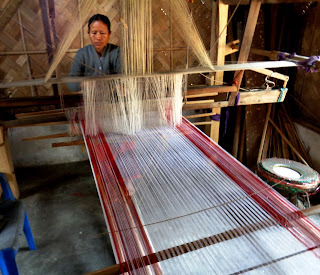 Since we were traveling to the border area of Assam with Arunachal on this trip, I was hoping to see a Mithun. Well I got see this beautiful animal, which is semi-domesticated and indigenous to this remote area of the north eastern state of Arunachal Pradesh. It has the head of a Buffalo and a body of a big cow. It is considered sacred to some tribes. 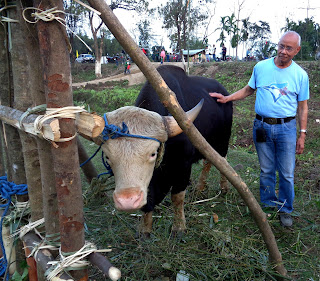 My stay in Guwahati is coming to an end and I am going to miss seeing, hearing and listening to the many varieties of birds. Most of them I had seen growing up in Chittagong, Bangladesh but did not appreciate them as I do now. I saw a flock of Bulbuls yesterday which I had never seen before in a large number. I am also going to miss hearing the singing from the chapels of the convents, the Forum and the Don Bosco Institute, which are all situated on the slopes on opposite sides of the hills that form this canyon and which causes the echoing effect, especially on Sunday mornings. 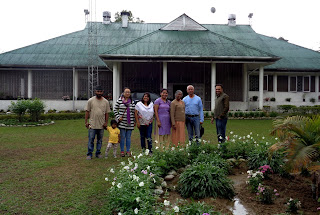 Ron and Sr. Betsy with the Tea Garden Manager, his wife, and
the Women's Development Center workers