(Our internet connection has been unavailable since early Saturday, thus the late post. If you haven't heard from someone on the team in a while rest assured we are all still going strong...ish :-) ) 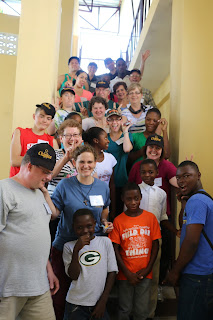 The past two days have had as many peaks and valleys as the roads we’ve been driving on. Saturday started strong at a school in Latiboulière, and, as we had suspected, giving Pop Rocks to the unsuspecting is highly entertaining for all to see. We then divided the team, with some going on to Préville to paint and to “cruise”, and some went on home visits to sponsored children. The ‘cruisers’ arrived to discover that their digging tools for the day consisted of a shovel and a piece of rebar, but they persevered and made significant headway into making a latrine for an incredibly grateful family. Shout out to their translator Chancely who rescued them from the scorpion.

The home visit crew had a different tale to tell. Having been told the home of Mary-Louise’s sponsored child was a 15 minute walk from the road, they set out with gusto. An hour-and-a-half climb up a steep trail later, they finally arrived. Heather admits that when they passed a graveyard, they considered just taking up shop, but again, perseverance shone through and the sponsored child and her mother were effusive with their gratitude. We don’t think Mary Louise will mind us telling you that she is 72 years young.

Meanwhile, the painting and cruising group met for lunch and encountered a group of kids, so we asked them what they were doing at a school on Saturday. They were coming for choir practice, so naturally we demanded proof. They regaled us with a welcome song, and one of Haiti’s six (or seven?) national anthems. Our translators explained that there is the “die for your country” one and the “joyful” one, and we can’t come to a consensus among our group which one we heard.

A powerful moment came shortly after when we returned to the vehicles to head back to work. A young boy of about 14 appeared with severe wounds on his elbows, knees and ankles. He was panicked and looking for help. Amanda, our Saskatchewaner nurse, grabbed the first aid kit and set to work, carefully cleaning and dressing his wounds. He told us that he’s epileptic and had fallen from a seizure. We were all deeply impressed with Amanda’s skill and composure during the situation that was unexpected and quite distressing. None of us could stop thinking about the young man, and sought through the field staff to know more about his situation and if there was anything we could do to help him. The Chalice staff are working now to figure out how we can act to support him in the most timely and effective way. Please keep an eye out for updates on the story of Frankel.

To top off the day on Saturday, we had truck ride that left us more battered than a seaside lunch. Tired, sore, sweaty and emotionally drained, there were a lot of showers and hugs (by necessity, in that order) at the end of the day. We made good use of the pool that night.

Sunday was much brighter. We began at Mass in Jeremie – when we arrived, one Mass was just getting out, and we guessed the average age was about 18. We were at the children’s Mass, and the kids were incredibly well behaved (although they were in uniform and sitting with their teachers – talk about never getting a day off!) and the choir must have been about 60 elementary-aged kids. What we lost in language barriers we made up for in marveling at the exuberance of the celebration. We spent the ride back to the hotel lamenting how pale Canadian traditions seem to be in comparison.

Sunday afternoon was our long-awaited Community Day, two hours with about 60 sponsored kids from around the city. After introductions, several university students who had been Chalice sponsored spoke to the kids about the need to work hard and stay in school. 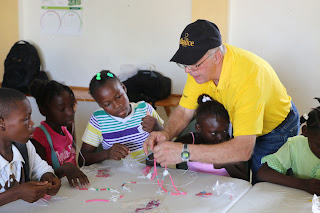 We then broke out into groups of activity. Sandra and Carl led rosary-making, Mary-Louise and Amanda led bead bracelet/necklace making, and Ben, Karli and Kristine led the highlight of the day: hockey (complete, we might add, with the singing of national anthems at the start). 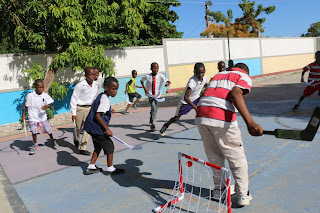 Then Mary-Louise made a very special presentation: how to brush your teeth, complete with a dental model and toothbush. Most of the Canadians admitted to learning something from the presentation. Each of the kids received a tooth brush and toothpaste after the demonstration, which is how we justified bombarding them with candy and sweets immediately after. 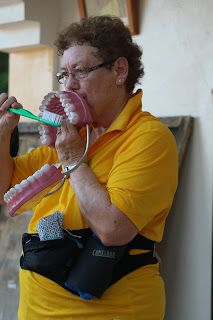 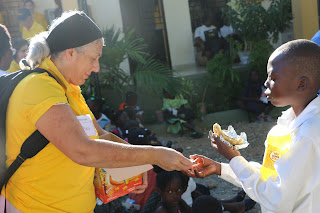 After the snack, most of the group had their home visits with sponsored kids. It is an exciting moment for the kids because they get to introduce their parents and siblings to their “godparents”, and be the centre of attention within the neighborhood for a few minutes. Plus, they receive gifts from their sponsors back in Canada, with treats and photos and small items like rosaries that they can keep. Each family thanked us with genuine gratitude and assured us they were praying for us, and asked that we not forget to pray for them. 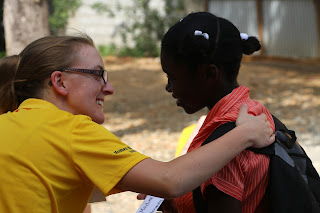 Now, you may be wondering, “this is all well and good…but how is any of this like Inverness, Cape Breton?” Well, Fr. Duncan tried to make some comparison about chickens. Sorry Father, but it was pretty weak. Although he did say that our group’s blogger was good enough to work at the Inverness newspaper, so we’ll take that as high praise.

Today we are heading back to work in the community of Roseau and make a special walk to a community called Plangue. More to be revealed in the next post.