This morning we travelled by bus for about 1/2 hour to the Chalice Ogwedi-Rafiki Sponsor Site, located in Asembo.  The plan here was to present, in separate groups, sex and hygiene education to approximately 100 boys and 100 girls.  Following the education the boys were given a personal hygiene kit containing a pair of underwear, a facecloth, a Canadian flag and a pencil.*  After their training, the girls each received a Days for Girls reusable menstrual kit.  The reaction from both the boys and the girls was of sincere gratitude, with lots of smiles and giggles! 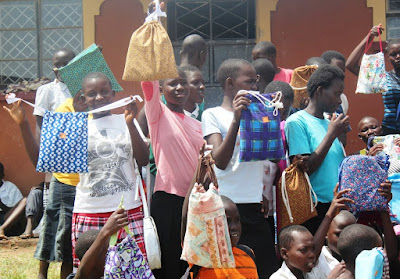 While the groups attended their appropriate session, the remaining team members entertained the others with relay and other running games.  All the children and young adults - especially the boys (even our Site Director, Jastus) - thoroughly enjoyed the games.


The small children received hand-washing lessons with the aid of glitter to demonstrate how easily germs are passed on from one person to another.  Once they had thoroughly washed their hands, the children received a tattoo on their arm and later a small bag containing a pencil and some candy.
Lunch, prepared on-site by several local women, was provided to all of us children and adults: approximately 200+ people in all.

*To be honest, we were focussed on the girls to a fault.  After all, the mission was called “For the Girls!”, we were an all-women team wearing pink mission shirts, and menstrual kits were the theme throughout.  We had planned an education session with the boys, but had actually arrived without a gift for them – at all.  We were inspired when a Rafiki Staff Member, Steve, declared he worked in advocacy and came up to us wearing a name tag that read “For the Boys!!”