So get this: a Canadian priest is sitting in the waiting room of a Haitian medical clinic. He’s chatting with a woman whose husband is behind the privacy curtain with the Irene, the chiropractor. Irene is working with the man and hears Fr Duncan, in true Canadian fashion, strike up a conversation about the weather. She hears him say “Il fait chaud” (It’s hot out).  Then she hears her reply “déboutonnez votre chemise.”  Irene, knowing Fr Duncan wouldn’t have understood the woman, calls through the curtain, “She’s telling you to unbutton your shirt.” To which she hears Father’s startled reply, “She already has!” 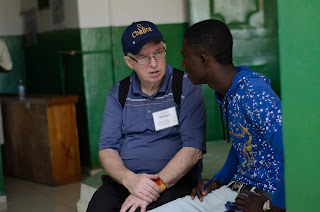 So while our team is not getting undressed by the patients, we’ve been busily treating them in the clinics and visiting them in their homes. But as much as the medical, physio and chiropractic care is invaluable to the patients, it’s the intangible “extras” that seem to have the greatest impact.
One team visited a woman who had just passed her 95th birthday – and when we broke out into “bonne fête à toi” the joy on her face was radiant. On another visit, Randy gave his lunch to an elderly man who hadn’t been able to prepare food for himself and was very hungry – it was chock full of potatoes, his favourite.  Sr Merilise and Alejandra helped him cut them up into more manageable bites.
Father Duncan began the day on Wednesday not knowing what his role at the clinic would be that day, and decided that he would wash the feet of each patient going to see Irene for chiropracty. For Father, it was a holy and deeply prayerful act. Edley, however, was walking through the clinic and overheard a baffled woman saying “why is he washing our feet?” – which had Edley in fits of laughter even hours later. We figure twenty-odd Haitians also went home to their families and probably laughed just as hard as they told them of the nutty Canadian doctor who was washing everyone’s feet!

Both Edley and Sr Gina had the same thought in the wee hours of yesterday morning - God wanted this mission to happen. We know this because, in the initial planning stages of this trip, our team was going to have stayed in a hotel in Cap Haitian, and not in the guest house nearer to the communities where we are now. With an unsettled political climate in Cap all week, several doctors and staff have not been able to leave. If we had been in Cap, this Mission might not have happened at all.

Betty Jane reflected this morning about an experience she had last year, beginning pastoral care in a large parish in Kenya. She had a no idea what to do and no one to guide her, and prayed that the Holy Spirit would tell her what to do. And from the first day, she was busy every day. She learned to “let go and let God.” And that is what we are learning here, too. When we can be open and “let go” of plans and expectations, we are much more free to engage with the need of the moment, and relax into enjoying the day’s work. One of our young translators, John-Peter, had to learn both “up in the air” and “loosey goosey” as we described our schedules for each day (and, we can report, successfully used them in conversation). And like Betty Jane said, everyone’s had an important role and no-one’s been bored. Everyone came with a desire to serve, and everyone has found their own unique way to do so, and it has already born so much fruit.