June 02, 2013
We started the morning with running water.  Yeahhh!  We had a very good breakfast of eggs, beans, ham, toast and fresh pineapple, papaya, and cantaloupe.  After breakfast, most of the group went to the Nutrition Centre on tricycle rickshaws because the white van was being repaired (we noticed a loud squeak the day before).  A smaller group visited sponsored children at Andres Giron. Norma went to the Nutrition Center to help pack 600 bags with donated items (brought with us from Canada) such as pencils, crayons, sharpeners, notebooks, colouring books, jigsaw puzzles, soccer balls, stuffed toys, toothpaste, tooth brushes and more! Along with Norma, Tim, Nicola, Cathy, Sandy, Damien, Patty, Diana, and others worked in an assembly line to get this done.  The conditions were very hot (mucho calor!) and mucho humid.  The bags will be handed out to the sponsor children and their families on Sunday at the Community Picnic.  Others who went to the Nutrition Centre chose to help with the babies (feeding, holding, playing, etc.).  Maria was holding a baby and unfortunately the diaper did not work well!  But Maria took it all in stride.  For future reference, note that soap bubbles are a big hit with children!!  The staff and the Sisters at the Nutrition Centre are amazing.  They are loving and tender with the children (and with us!).  They have taught us the true meaning of patience.


Sharon, Becky, Annette, MaryAnne and some field workers and translators went on 4 visits to sponsor children’s home at Andre Giron.  Each visit is different, because each family situation is different. At one visit (we will call the sponsored girl Francesa, but that is not her real name), we learned that the family consists of a mother and 4 children with ages 12, 9, 4 and 1. Francesca is 9.  When we visited the home in the morning, we were told that the mother and Francesca were in the field working.  Later in the day, we attended a special mass for the community and blessed the Community Dining Hall.  We met the mother and Francesca there.  They were wearing their traditional dress and looked amazing.  They have Mayan ancestry and are quite striking. After the mass, we walked with them back to their home where the field worker suggested that we be invited into the house.  The mother was reluctant, but opened the door.  We felt her shame. The one room house was very dark and laundry was hanging from clothes lines everywhere.  The mother explained that the father lives next door and is married to a second wife (with children).  The mother works the fields, and does the house hold chores, and must give some money to the second wife.  The mother could not pay her electricity bills, and had no electricity.  The mother also explained that while she was working in the field, Francesca was babysitting her younger siblings in the field.  When they got home, she did laundry, got dressed and the kids dressed and came to the Church.  She also explained that her youngest son was sick, but she could not go to the doctor because she had no money.  So this is a day in the life of the mother and Francesca and explains their absence in the morning.  We had an overwhelming feeling of wanting to do more for the family, perhaps pay for the doctor and the electricity bill ourselves.  We did not offer to do so.  We thanked them for their hospitality, said we would pray for them, said we would write, and walked away.


As mentioned above, in the afternoon we had a mass where a chalice was presented to the parish.  It was presented by Chalice on behalf of a member of the Knights of Columbus who passed away (the Knight’s family gave it to Chalice).  Fr. Duncan commented that he was pleased with the number of ninos at church (more than he’d ever seen at a mass in Canada).  After the mass, the children performed traditional dancing, gifts were given to Chalice staff from the community, and Fr Duncan blessed the new (and almost complete) Community Dining Hall.


By Norma Mastrangelo and MaryAnne Arnoldo 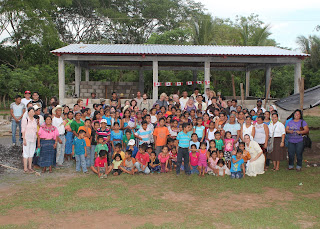 Group photo after Mass
(in front of the new Nutrition Centre)