March 05, 2019
Excitement mingled with jangling nerves and lots of questions.   A small group of mission participants met at Toronto Pearson, ready to travel to Villeta, Paraguay.  Of all the 19 participants travelling from all over Canada only one set of suitcases were misplaced by an airline.  We are still awaiting the arrival of these suitcases! 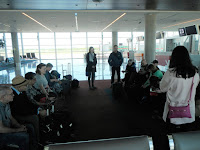 Despite a lot of turbulence, all the different flights arrived safely.

Most of the group met at the airport in Buenos Aires.  We were able to have a prayer circle before our flight to Asuncion.

In Asuncion there were no difficulties with visas and customs. 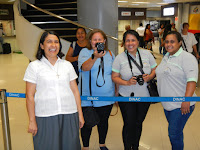 The welcome committee from the CMVIL site in Villeta met us as we came out of the airport in Asuncion, Paraguay.  They greeted each person individually, and we all felt so special. 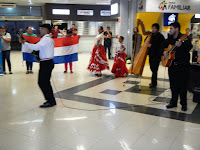 Then, we were quite surprised to have a demonstration of local talent dressed in traditional costumes.  Wow! What a welcome!

The next day we all were welcomed again by the community as we left the hotel.

At the site office after a walk in the hot sun through the streets of Villeta with assistance from traffic police, we were greeted by many of the indigenous children. They sang a joyous song of greeting.

We were entertained with music, poems, songs, and dances.

There was a strong emphasis on the Word of the Lord as exemplified by the processing of the Bible
into the hall.