We were told this morning that we had to be ready a whole half an hour early, because Sister Graciela was just so eager to get us to this particular community on our itinerary,  called Sol Naciente (Rising Sun).

She's particularly fond of this community because it is a relatively new development. Families have been given plots of land and they are building homes. The roads are unpaved and are riddled with ridges and mud puddles. It would be very difficult to drive anything larger than a motorbike on them, and that's after only a few days of relatively mild rains.
Surprisingly these are better than the ones that they had had previously, and the sisters from the Site have been integral to those road improvements. There are no schools or medical services yet and the only convenience stores or take-out spots are small, family-run kiosks. Children have to walk 4 km each way to get to school. There is also no police
presence, which makes the area dangerous at night.

Nevertheless , the sisters see so much potential in the children and families of Sol Naciente. When we arrived, we could see what they meant .The children are bright and the parents are driven to make better lives for their families. We were greeted by the families of three Circle groups. The children have taken time to draw their versions of the Canadian flag, as

well as their own flag. They lavished us with generous gifts of a traditional woven-reed fan, which handily doubles as a mosquito paddle (and triples as a means to fan the flames of a wood-burning cooking stove).

Each mother took the opportunity to greet the group, thank their sponsor, and tell us about themselves  and their families. Many mothers and students who had earned certificates brought them to show off their accomplishments. 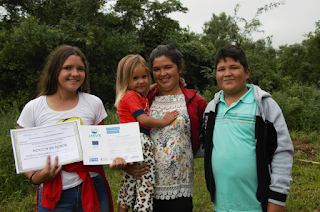 After the introductions, and a homemade snack, we get to the fun stuff: a
couple of simultaneous high-energy games of soccer, kite flying, skip rope, and games of catch. Meanwhile, with the parents of the community, we facilitated some team building activities. Sr. Graciela and her team are eager to continue strengthening the ties within these Circle Groups as they are the real change-makers in their communities. Although the rain held off, we brought much of the field back with us on the bus, caked on our shoes and spattered to our
hairlines. 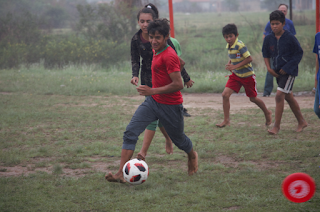 After lunch we went to another community for a marathon of home visits. Some of the group got to meet a mother named Eliset and her sponsored son Willian. Their Chalice sponsor had helped them to build a new home next to their former home. The difference is extraordinary. It is difficult and heartbreaking to imagine a single mother and her three children living in the bare-bones structure that was once their family home. Now they live in a safe, dry house with a bedroom, bathroom, kitchen, sitting room, and second bedroom where their aunt stays sometimes. They are connected to electricity and water. Eliset couldn't stop telling us how grateful and happy she is to have a warm place for her children to grow up. This time of year, she told us, used to be the hardest because of the rain.


After only a few storms we have seen since we've arrived, we can only imagine what that must have been like with hardly a roof over your head. We thank God for that generous sponsor, and hope that someday we too can be that generous when a family is in need.

This morning, during our time of prayer and reflection as a group, we reflected on the passage from the Gospel of Luke in which Jesus calls Levi. Levi gets up and starts following Jesus and creates the banquet. We reflected on the meaning of "getting up," as it is the same word in ancient Greek that biblical authors use to describe Christ's resurrection. To "get up" is to die to an old life and take on a new and glorified one.  It isn't difficult to draw the lines: the rising Son to the community called Rising Sun, and the lives in transformation we were privileged to encounter all day.